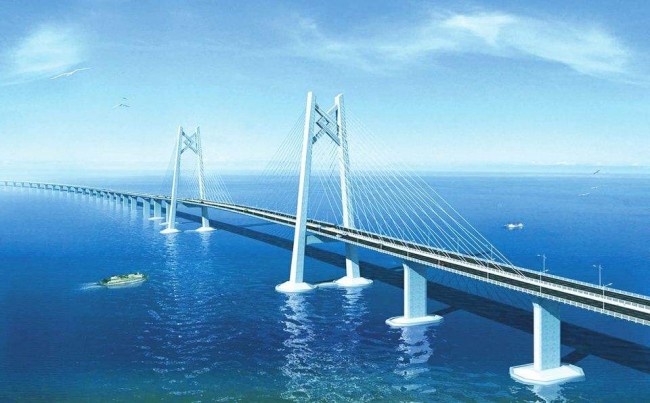 The Hangzhou Bay Bridge spans from Zhengjiatun in Haiyan County, Zhejiang Province, to Shuilu Bay in Cixi, Zhejiang Province, with a total length of 36 km. The bridge is 35.673 km long and is one of the longest cross-sea bridges in the world. In order to reduce the self-weight of the bridge and reduce the energy generated by the collision barrier of the vehicle, and to coordinate the anti-collision guardrail with the landscape around the bridge deck, in line with the requirements of the full bridge landscape, the bridge deck anti-collision guardrail adopts a metal beam-column guardrail. The guardrail column is fixed by M30 size anchor bolts embedded in concrete, including 19141 central guardrail columns and 38283 side guardrail columns. There are 2019 pillars of the ramp bridge guardrail and 182 pillars of the platform guardrail. Each pillar has 4 anchor bolts, and the total number of anchor bolts is 238,500.

The bridge is located in a harsh marine atmospheric environment, and the corrosion speed of various components, especially screws, bolts, nuts and washers, is significantly lower than other components. Severe corrosion of the anchor bolts will lead to a decrease in the strength of the column, which will affect the anti-collision capability and service life of the bridge guardrail, and there is a great potential safety hazard. Because the pre-buried anchor bolts are difficult to replace during the design life of the bridge and the replacement cost is high, the bridge management department decided to carry out anti-corrosion repair coating on the full-bridge guard rail anchor bolts to maintain the normal and safe operation of the bridge.

The anchor bolts currently used in the guardrail are preservative treated with the Dacromet process; the anchor bolts of the steel guardrail column, the nut cover, the strength of the PVC (polyvinyl chloride) shield, and the inside of the butter, thus blocking the air and moisture with the bolts and nuts. Contact to achieve corrosion protection. The bridge was opened for 5 years. Due to external factors such as corrosive environment and severe weather, the anchor bolts of the bridge showed deterioration of the protective cover, loss of grease liquefaction, corrosion of the anchor bolts, and even loss of some components. According to the analysis, chlorinated water and air eroded the screw on the lower side of the bottom plate, and crevice corrosion occurred. Crevice corrosion is a kind of electrochemical corrosion, which is more rapid and serious than the electrochemical corrosion caused by iron rust. Crevice corrosion usually occurs in areas where metal surfaces come into contact with gaskets, gaskets, linings, surface deposits, etc., as well as lap joints, metal overlaps, etc., where crevice corrosion occurs, allowing corrosive media to enter, while narrowing To maintain the solution of the medium is still. Due to the lack of oxygen inside the gap, the reduction of oxygen is mainly carried out on the metal surface outside the gap, and the metal inside the gap dissolves to generate excessive positive ions (M+). In order to maintain the electric balance, harmful ions such as C1_ are moved into the gap from the outside, and as a result, the concentration of metal chloride in the gap is increased, and the metal chloride is hydrolyzed to generate a free acid, thereby accelerating the dissolution rate of the metal and forming an autocatalytic process. Compared with other parts of the guardrail, the anchor bolt is located at a location where the corrosive medium is easy to gather, but its own Dacromet coating is weaker than the heavy anti-corrosion coating system on the guardrail surface. Therefore, at present, China's key projects such as the Hangzhou Bay Bridge and the Donghai Bridge, the corrosion of different parts of the anchor bolts have affected the structural safety of the guardrail.

According to JT/T 722â€”2008 â€œTechnical Conditions for Anti-corrosion Coating of Steel Structures of Highway Bridgesâ€, the Hangzhou Bay Bridge is in a C4 ~ C5M corrosion environment, which is a highly corrosive marine atmosphere. Chloride ions have a strong corrosive effect on steel components. In order to ensure the anti-corrosion performance and anti-corrosion life of the coating, a novel coating and sealant is used to carry out the new technology of anchor bolt protection [1]. The coating scheme of the anchor bolts designed according to this corrosive environment is shown in Table 1 and Table 2. The seal of the anchor bolt is sealed by a sealant seal, as shown in Figure 1. 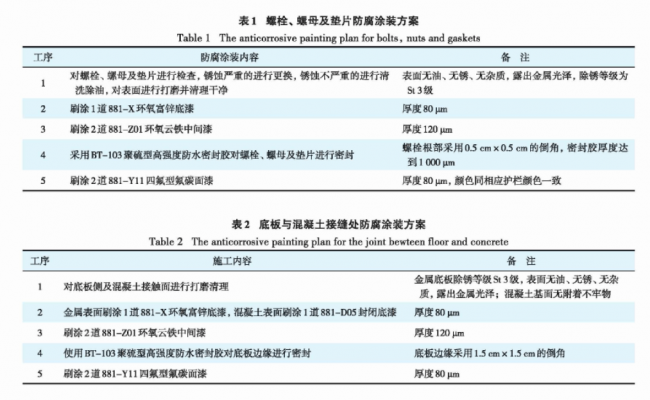 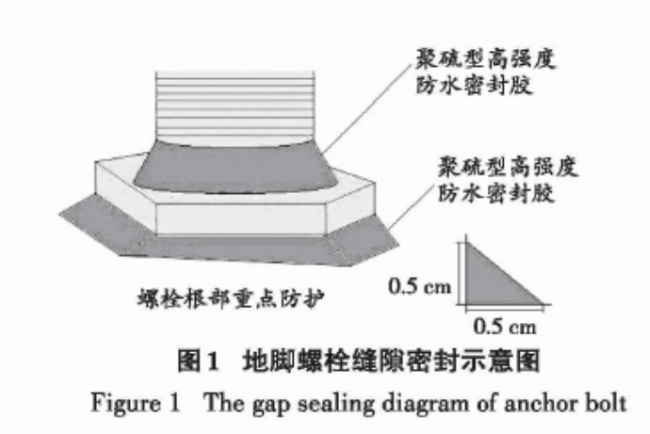 The quality of anti-corrosion coating is mainly controlled from various aspects such as raw materials, construction and environment.

The bolts were removed by hand and mechanically polished to a St 3 level. The performance indicators of various raw materials are shown in Tables 3 to 6, respectively.

3.2 Control of key factors in the coating process

(1) Surface treatment: Spray loose liquid, unscrew the nut, lift the guardrail, and thoroughly polish the root of the bolt and surrounding concrete.

(3) Put the gasket and tighten the nut to seal the outer surface of the nut and the base to ensure excellent sealing.

(4) After the sealant has been vulcanized and hardened, the fluorocarbon topcoat can be painted and the topcoat can be kept in the same color as the guardrail. 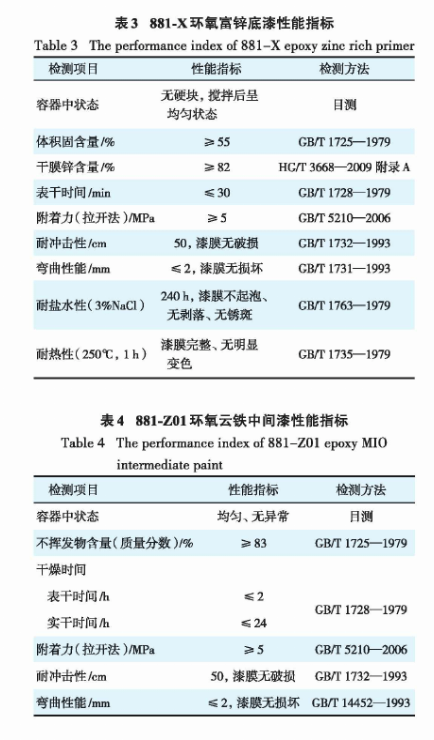 Immediately after the coating is fully cured, the thickness and adhesion of the paint film are determined. The dry film thickness is measured by an accurate magnetic thickness gauge, which can be directly read to facilitate large-scale data collection; the adhesion is determined by the cross-hatch method. In the event of unqualified construction sites, the surface of the paint film should be roughened and recoated to ensure the quality of the coating.

(1) The corrosion of the anchor bolts of the steel fence of the Hangzhou Bay Bridge is mainly due to the deterioration of the external protective cover due to the harsh environment, the lack of butter in the cover, and the corrosive medium such as water and chloride ions infiltrating into the root of the screw to cause bolt corrosion;

(3) Formulated a strict coating process, and strictly in accordance with the requirements for quality control and acceptance, to ensure the quality of anti-corrosion coating;

(4) The engineering practice shows that the protective sealing measures can withstand the harsh environment, and the long-lasting effect ensures that the root of the bolt is in a relatively closed environment, taking into account the advantages of coating anti-corrosion and sealing anti-corrosion, and the engineering application effect is reliable;

We adopted high-grade stainless steel and excellent silica gel blue circle as a lamp body of the LED pool light, with an excellent waterproof sealing material, so quality is absolutely guaranteed.We also make sure the light from this RGB LED swimming pool light more uniform and bright. Used for both Fresh or saltwater pool.

â€¢ Adjustable angle: Rotating lens up to 130 degrees that allows for light distribution in the direction that best suits your space.

LED pool light is a new type of energy-saving and Landscape lights, which have been rapidly developed due to their power-saving and long life characteristics. Our LED underwater lights are widely used in lighting, pool-oriented lighting, green landscape lighting and some outdoor Fountain lighting.

We have rich production experience in lighting .Except Indoor Lighting product, we also offered other product in Outdoor Lighting ,such as LED Flood Light , LED Street Light , LED Inground Light, LED Spike Light & LED Bollard Light as so on .